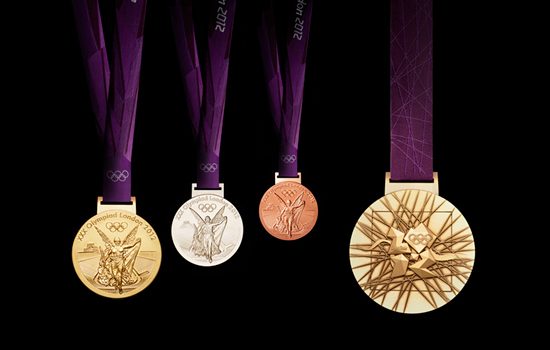 First revealed in 2007, the London 2012 logo designs caused plenty of controversy. Today most reviews are positive, as the brand has grown and gathered momentum, being rolled-out across every imaginable medium. But whether you love the design or hate it, the logo has succeeded in the one criteria required of any successful brand – you will recognise it.

The colour scheme includes luminous interpretations of the Olympic colours.

The organisers (LOCOG) set a clear ambition for London 2012; the games were to be everyone’s, regardless of age, culture or language. Aiming to attract and energise audiences, the logo design is deliberately unconventional – bold, spirited and intentionally discordant – echoing qualities of the city itself. The designs avoid depicting individual sports and famous landmarks, going beyond London and beyond sport to show the Games are for everyone.

The design focuses instead on ‘2012’, breaking the numbers to form a block.

The shape is designed to be populated with different contents, acting as a window for photographs, illustrations and artwork placed within. This has enabled designers to use the logo innovatively across a wide variety of applications. The 2012 logo created has become a highly flexible shape that continuously evolves under different circumstances, adding interest and a dynamism that keeps the London 2012 brand fresh over a sustained period of time. Commercial partners are able to customise the logo to fit their campaigns as needed, changing the colours or positioning elements inside.

‘We wanted to make sure that whatever we came up with was a great piece of design but it also worked hard for our identity… to create an asset that we, our licensees and our partners would use in more creative ways than just at games time – we really wanted to push the concept for the pictograms and one of the outcomes of this was to create two style versions – a silhouette version used for high visibility and information-based applications, and a dynamic version used both as decoration and where a more exciting version is called for.

Do I believe they could rival the Munich games’ versions? Absolutely, because I strongly believe these will touch and inspire everyone – whether in London, the UK or more widely around the world.’

Details within the brand have developed a visual identity that gives London 2012 a strong and distinctive platform that works across every touchpoint that you come into contact with; from the venues, stadiums, seating, podiums and signage – to vehicle livery, tickets, print and digital graphics. This is possible thanks to the ‘shard pattern’ created by the lines which form the logo design.

These lines have been said to represent the flight paths bringing athletes to London, focusing their energies at one concentrated point. 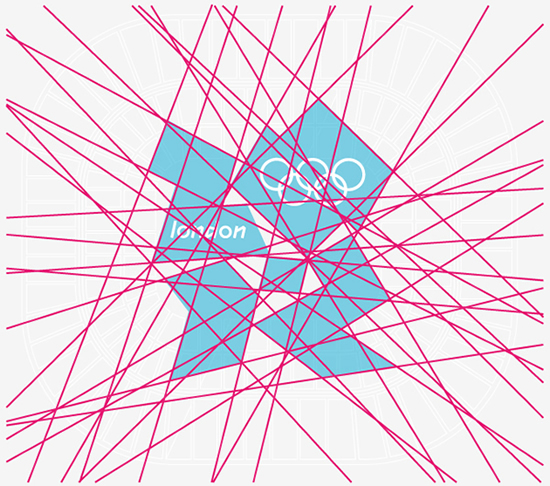 ‘The core idea was to use the lines and shards ­that the logo emanates, creating a ‘burst of energy’.­ Whether the entire field of play with the seating becoming a huge graphic, or simply surrounding the Olympic rings with the burst, printed on a coral on the field of play. It all goes back to the idea of a festival of human endeavour, with athletes pushing beyond their personal best.’

‘The grid is used in a flexible and dynamic way, creating shards patterns and textures that radiate from a central focal point. The joy of this graphic device is that it can be adapted across lots of different spaces and places yet remain clearly recognisable and consistent. This means we can tell a single design story, from the seating bowl designs to the patterning on the concourse.’

‘The ensuing look is provocative, unexpected, distinctive and bursting with life. It captures the youthful spirit of London and the energy of the Games. This core look has evolved to create separate but related identities for each of main sub brands that are a vital part of the london 2012 experience such as – games makers, get set programme, torch relay and London 2012 Festival. Each has to remain true to the core spirit of the Games, but develop a distinct take on it.’

The result is an ever-changing and exciting brand, adaptable yet instantly recognisable and distinctly ‘London 2012’ – and that has to be the true measure by which any logo design must be judged.